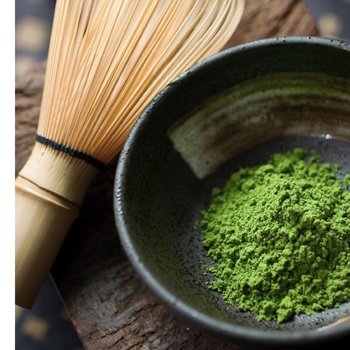 The Goodness of Matcha

By now you’ve surely heard about that fabulously good for you tea called Matcha But what is it – where does it come from – and why should you care.  This loaded with goodness ground tea was first made in China during the Tang Dynasty (618-907) and continued in the Song Dynasty (960-1279).  Initially, the steamed tea leaves were formed in bricks to help with storage and trade – these bricks were then pulverised and dissolved in hot water with salt.  In the Song Dynasty that followed, whipping the steamed powdered tea leaves in a bowl with hot water became popular – this preparation was then made into a ritual by Zen Buddhist monks.  It was in 1191 that Zen Buddhism along with the green tea powder ritual was brought to Japan by the monk Eisai.  The powdered tea ritual was eventually forgotten in China – but the Japanese not only adopted it, they perfected it and then turned it into the Japanese Tea Ceremony (a subject that deserves its very own post).

Matcha is a stone ground tea – but its preparation is arduous and requires much care and attention.  It begins several weeks before the tea leaves are picked.  The entire crop is covered with bamboo curtains in order to increase the chlorophyll content within the leaves – making them greener and slightly sweeter.  At this point, the leaves can become the prized Gyokuro, if they are rolled out before drying – or they can be laid out flat to dry and slightly crumble – known as Tencha.  The Tencha is then de-stemmed and painstakingly de-veined before it is ready for its final step – grinding.  Tencha is placed between two large stones that will grind clockwise and counterclockwise against eachother to break the leaves down into the fine powder.  It will take approximately one full hour for a stone mill to grind 40gr of Matcha.

Studies have shown that Matcha contains: