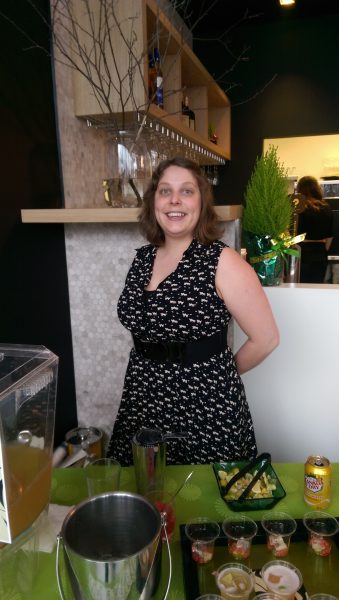 In their own words…Anne Ricard

When the opportunity presented itself to buyout a fledgling tea business, Anne Ricard, a TAC Tea Sommelier, jumped at the chance.   “Tea is very ‘tendence’ (French for trendy)” says Ricard. “So the opportunities are endless.” Anne launched her physical tea shop and online store, MysTea in Sherbrooke, Quebec, while concurrently taking the Tea Sommelier program. According to Ricard, the designation has resulted in press and marketing opportunities for her business. “The sommelier certification garners respect from others in the industry” states Ricard.

What is your earliest memory of tea? My dad drank Earl Grey tea daily and would give me a taste while my mother made me herbal tea to help me sleep.

Favourite TAC Tea Sommelier module? Tea 107, Menu Design, Food Pairing and Cooking with Tea. I ended up developing my own chocolate and tea pairing course for my customers. Watch here and here.

If you could drink two teas what would you drink? Sencha and Long Jing.

Where in the world has tea played a role in your travels? As a result of running my business full time, my opportunities to travel have been few. However, if I had time, I would travel to the Wuyi Rock tea region in China for a cup of oolong.

What is next for you? A collaboration to create a tea box set between us and someone famous. The box set will be distributed around Québec at a classy store *still a secret*.